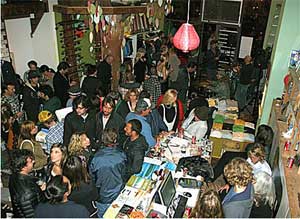 The Ron Stoner art show this past Saturday February 23rd at the Mollusk surf shop in Venice was awesome! There was some really cool music , that could be described as acoustic surf jam. Kind of a cross between 60″s surf music with a more acoustic blues feeling to it. Denny Aaberg, and Sam Adams were on acoustic guitars and were accompanied by a great drummer who’s name I didn’t catch. The art was great as expected, they had about 7 or 8 of Ron Stoner’s photos in their gallery that really showed his abilities as a surf photographer. You can’t forget about the surfboards they have on display. They have some really cool boards by shapers like, Liddle, Andreini, Anderson, just to mention a few. To sum it up it was a great party, with cool people, great art, and good music.