Home/Uncategorized/Bali Trip is a life changer! Notes from a Foam E-Z Customer. 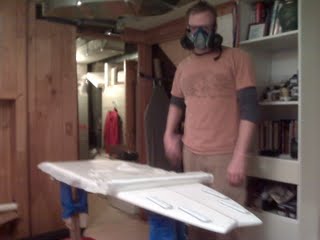 Here’s a cool email we recieved from one of our happy customers. Sit back and relax!

Hey guys. Just wanted to thank you for all the info and supplies that you’ve made available. I’m mostly landlocked here in DC except for the few times a month that I make the two hour junket to the coast. Its a stark contrast with Bali, Indo where I’d been living 2008-2009. I went there with extremely limited funds and made my peregrinations at extremely low cost. Even still, by the time it was time to come home, I didn’t even have the hundred some dollars necessary to ship my boards. As such, I sold two (both badly abused in epic surf), and left one with a friend. Not having a board when I arrived back in the states, I bummed around, borrowing boards here and there while I tried to scrape some money together to buy my own. A friend gave me an old 6’8 Clark Foam blank he had had sitting around for the past half a decade, in the hopes that it would help push me along to self-sufficiency. I felt apprehensive, as I had no experiencing shaping or glassing. In the mean time, I took a trip down to Avon, NC when a swell of superb caliber rolled through and promptly broke my buddies board in half. So now not only did I not have one for myself, I owed one to my buddy. I resolved to fix the one myself (with his permission), and shape the blank I had. I called around while in NC looking for some resin, but it seemed as if most distributors were bone dry, and most shops didn’t sell by the gallon. In one last ditch effort I stopped at the store front of famed East Coast shaper, Tim Nolte, who put me off to a good start supplying me with a gallon of resin, 9 yards of glass, fins and fin boxes, catalyst, and styrene monomer, all at distributor prices. The man nearly singlehandedly restored my faith in the goodwill and common decency of American businessmen (but not quite corporations as a whole).

Returning home, I managed to piece the one board back together within about two weeks, but found my talent at glassing to by wanting. Nevertheless, I commenced to shape and glass the blank. Aside from nearly fatal errors, a waste of at least half a gallon of resin and about 4 yards of glass, a few ruined sets of cloths (and brain cells), I managed to shape something rideable. Ironically, the day that I applied the hot coat, my buddy from Bali called me up to inform me that my board had arrived in NYC, and that I should come up promptly. And so packed up my grip, hopped on the bus, and went for a surf out at Rockaway on my board that just made a 12,000 mile journey on an overseas shipping crate amongst a load of cheap plastic jewelry imports. I don’t live a boring life, that’s for sure. I couldn’t have done it without all the beta and necessary supplementals you supply. You even supplied the Rasta keel fins I’ve got in that fishy while I was in Indo (its cheaper to have something shipped there from here than to deal with imported stuff there).

Thanks so much.
Jake

Photos: (In order from first to last) 1)Ed in Indo: epic, pumping, deserted waves right in front of malaria ridden camp sight. Only took 3 days on mopeds to get to. 2) Jake shaping Clark blank. 3) Ed pre-glassing. Should have followed the directions and put fins in after laminate coat. 4) Jake: Hot Coat. 5) Twin Fin Fish on left shipped from Indo, arrived same day board on right was finished. Board on right: 6’5″ quad 20″ wide. Who knows how thick…. Road map of Java in between.