Home/Uncategorized/Jodie Nelson Stand Up Paddles from Catalina to Dana Point! 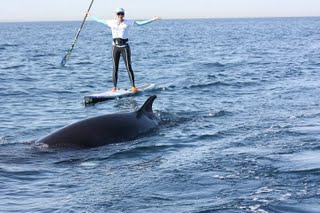 On Sunday March 28, Jodie Nelson of Surfside became the first woman to Stand Up Paddle from Catalina to Dana Point! Jodie is an accomplished pro surfer and currently commentates for ESPN, Fuel TV, and covers most of the streaming ASP events. Jodie also runs theSUPSpot.com a business that promotes stand up paddling through boot camps, lessons, and more.

In an attempt to raise awareness and money for breast cancer education, Nelson, of San Clemente, paddled nearly 40 miles from Catalina to Dana Point on Saturday, a feat that only three or so men – one being famous waterman Laird Hamilton — have completed.

“I wanted to go out there and do something that was big and overwhelming … and something I had a good chance of failing at. It’s nothing compared to what they go through,” she said. “They don’t give up.”

At first, Robinson didn’t like the dangerous idea. But she soon realized there was no talking Nelson out of it.

Nelson trained hard, spending long days paddling along the coast. About two weeks ago, her trainer and good friend Steve Adler died from an aneurysm – making the paddle that much more emotional.

She started the paddle at about 6:15 a.m., hours earlier than others doing a relay as part of the Ohana Ocean Catalina Challenge. She was the only person doing a solo paddle.

A few hours in, a 30-foot minke whale came up beside her board – at first startling Nelson and the boat crew.

The whale – dubbed Larry – was close enough that she could have pet it with her paddle. He started making bubbles beneath her, fluking, and showing his tummy to her. The whale stayed with her for about an hour and a half.

“It was the most beautiful thing I’ve ever seen in my life,” she said.

Not once during the paddle did she ask the time, or how far she had gone.

But after 8 hours and 51 minutes of paddling, loved ones cheered as they saw her coming to the finish line at Baby Beach. Her son Taylor, 15, held a sign that read: “I’m Jodie’s biggest fan.”

When she got close to shore, she lifted her paddle in victory, then threw it up in the air.

“I’m pretty sure, besides the birth of my son, this was the most monumental day of my life,” she said.

For Robinson, watching Nelson from the support boat as she struggled for hours from exhaustion gave her a different perspective of what Nelson experiences as she supports her during her battle with cancer.

“The struggle she went through today to encourage me was just enormous,” Robinson said.
Donations go toward Keep a Breast Foundation and Boarding for Breast Cancer. Nelson’s goal is to raise $100,000, and as of Sunday afternoon had raised about $8,000. To donate, go to paddlewithpurpose.com

One comment on “Jodie Nelson Stand Up Paddles from Catalina to Dana Point!”