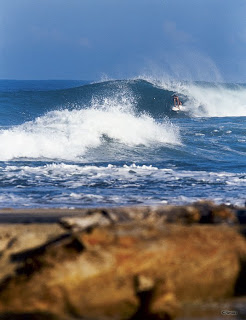 Travis Potter began his surfing life like a lot of other young, aspiring Orange County grommets. It starts with a glimmer of talent, soon followed by local sponsorship, obligatory NSSA contests, then it’s a career bound for the World Qualifying Series. At 13 Travis was on the North Shore for his first winter, a ritual he’d maintain for the next 10 years. But at 15, he discovered Indonesia for the first time and was addicted immediately. When he does return home to Seal Beach, it’s only to say hi to Mom and Dad, bang some nails, lay a little tile and save up just enough money to get back as soon as possible.

In April of 2008 Travis contracted a potentially deadly strain of cerebral malaria while traveling through the Southeast Asian island chain of Papua New Guinea. He has since recovered and talks about his experience in the following video.