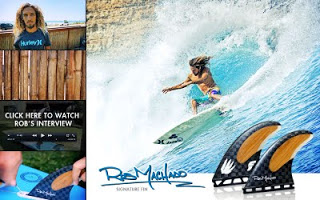 The Rob Machado signature fins are available to the public and are in stock at Foam E-Z. They look really awesome and have similar construction to the Black Stix but are made with renewable resources.

After nearly 10 years of riding the Futures system, Rob Machado has signed off on his first ever signature fin. The collaboration between Rob and Futures is the perfect blend of cutting edge hydrodynamics and environmental sustainability. Rob’s fin features a torsional flex pattern, thanks to Futures’ V2 foil and a layer of strategically placed carbon fiber. Combined with renewable, fast growing bamboo, the fin is both light and lively. Designed for Rob’s explosive style, the bamboo carbon matrix stores potential energy and releases it as a burst of kinetic speed. Rob had been riding the V2 AM1 BlackStix for years, he said, “I knew that was a good starting point for me in designing a fin. I just really liked the flex that the BlackStix had. I don’t know exactly what it does but it feels good. I am more of a feel kind of person, you know… sometimes it just feels good.” “We have been lucky to work with Rob and we are proud of how this fin turned out,” says Head Designer and Founder Vince Longo. Rob’s fin is made of a high quality epoxy resin, instead of polyester. Not only is epoxy resin stiffer, lighter and better performing, it is also more resilient and releases less VOC’s (Volatile Organic Compounds). The Rob Machado Signature Fin represents a step forward in decreasing the environmental impact of the resin transfer process, while remaining Strongest, Lightest, Fastest.