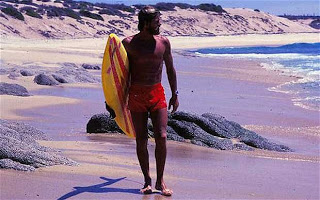 I’m sure by now you’re all aware of the untimely death of Surfline Entrepreneur Sean Collins. Growing up as a Harbour grom in the early eighties, I had the pleasure of getting to know Sean. He was one of my local idols as I loved his smooth style and the way he carried himself. I couldn’t wait till he’d come back from his Mex trips so we could look at his pictures. Subsequently, some of the photos would make it to the wall of fame at Harbour Surfboards. Sean was usually at the Harbour functions getting bombarded with forecasting questions. If I didn’t see him around the shop, I would run into him surfing at the Side. Sean usually didn’t have too much to say, but was always super cool to be around and whenever he did say something it was complimentary or insightful.

I remember he used to bring the early Surfline Faxes to Harbour for Rich to feed to us frothing young surfers. It was truly groundbreaking as I couldn’t wrap my head around those faxes. Later in life I was lucky enough to do business with Sean as we have run ads on Surfline since it’s inception. Check out this cool video I found of Sean back in the Surfline Fax era (1991).

Our best wishes go out to Sean’s family, friends, and his staff.