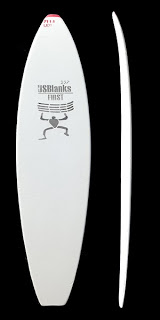 Jan 13
POLYURETHANE FOAM
“PU” foam, as it’s known, has been the predominant material used in surfboard construction for more than half a century.  The goal of this article is to share the history and lineage of our product and aid in the understanding of the material that is at the core of our surfing experience.

Polyurethane was first used in 1937 by Otto Bayer in Germany and quickly found applications during World War II where it was used in aircraft construction (coating and insulation).
Prior to commercial polyurethane surfboard production and working out of his garage in Pasadena, California, seminal surfboard designer Bob Simmons (who introduced fundamental design elements of nose-lift, foil, and sculpted rails) first began experimenting with polystyrene foam as a surfboard construction material in 1947.  He made “sandwich” boards constructed of a polystyrene core sandwiched between two planks of balsa plywood with hand-shaped balsa rails enclosing the design.  Simmons learned that polyester resin dissolves polystyrene on contact so the plywood kept the volatile components from meeting.  He then sealed the design with fiberglass.  During the summer of ’49 Simmons partnered with local Malibu surfers Joe Quigg and Matt Kivlin to sell more than 100 “sandwich” constructed surfboards.  This construction method outlined the building blocks for modern PU surfboard construction.
During the early 50’s polyurethane was being a used in common household items, like insulation in refrigerators.  Dana Point surfer and board builder Whitey Harrison successfully cooked a polyurethane blank in his barn in 1955, but never attempted larger production.  In 1956, brothers Dave and Roger Sweet found success selling polyurethane blanks in Los Angeles, but lacked the precise designs that would aid shapers in fully embracing the new material.
Meanwhile, reliable balsa wood supply was dwindling, which prompted shaper Hobie Alter and his glasser, an engineer named Gordon “Grubby” Clark, to switch their entire supply of surfboard material from balsa to foam.  The pair invested in a secluded factory in Laguna Canyon, where they designed a mold that would create a blank in two halves, divided lengthwise.  The halves were glued together with a wooden stringer.  The design was finished with fiberglass and coated with resin.  By the summer of 1958 the foam and fiberglass construction had secured its place as the premier performance surfboard in California.
The new technology was widely embraced by surfers, but the popularity of the movie Gidget in 1959 greatly increased America’s fondness for beach lifestyle.  Alter and Clark were perfectly positioned to accommodate the new demand and they quickly established Hobie Surfboards as one of the leading names in surfing.  In 1961 Clark bought Alter’s share of the foam production business.  The split was amicably, and Gordon Clark officially established Clark Foam.  The business moved to Laguna Niguel in 1964, and by the end of the decade Clark had the lion’s share of the world surfboard blank market.  With his engineering background and a keen business sense, Clark made endless improvements to his production line and portfolio of blank offerings.  He accommodated the ’60s surfing boom and held a steady grasp of his paramount position as the world’s lead supplier of surfboard blanks for the next 41 years.
After the closure of Clark Foam in late 2005 two former key Clark employees partnered with two industry veterans to form and launch US Blanks in early 2006.  US Blanks redesigned many popular blanks sizes and used their sizable team of highly experienced, former Clark employees to produce consistently high-quality polyurethane blanks on a large scale.  US Blanks additionally offers EPS foam and, over the following 7 years, has secured their position as the world’s leading supplier of surfboard blanks.  As of 2013, polyurethane foam is still the most widely used core for surfboard production.  US Blanks manufactures a water-blown, Isocyanate based Polyurethane foam.

US BLANKS PU FOAM
US Blanks manufactures a water-blown, Isocyanate based Polyurethane foam.  Polyurethane surfboard blanks can be glassed with either polyester or epoxy resin, making it versatile in terms of giving riders more options.  Polyurethane foam is regarded as easier to shape than other types of foam.  It is also slightly less expensive than Expanded Polystyrene.  US Blanks offers PU blanks in 6 varying densities, 9 foam color options, and over 50 different blank sizes and dimensions.  Each blank is cut and glued to order, to the client’s specific rocker and stringer requests.  Thousands of rocker adjustments are available to choose from or custom adjustments can be accommodated.  US Blanks’ in-house mill allows for almost any conceivable stringer configuration to be incorporated into any surfboard blank.  The result is a completely customizable surfboard blank that Foam E-Z can get for the customer in one week!.  US Blanks is also the only polyurethane surfboard blank company manufactured entirely in the USA, from their facility in Southern California.