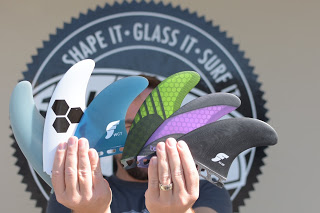 Fifteen years ago almost every
proud surfer in the line-up insisted on riding glass on fins and had 34 reasons
to tell you exactly why they were better than fin systems.  Even as recent as ten years ago many people
were still dubious of removable fins- in the 2008 movie One Track Mind, nearly every surfer interviewed on the subject from
Mick to Dane to a young Kolohe insisted they only ride glass-ons (everyone
except the ever experimental Kelly of course). Fast forward to 2016 however and
it’s not only unlikely that you’ll find very many surfers at the top of the game
riding boards with permanently affixed fins, its doubtful that’ll you find very
many in your local lineup anymore either. And this is not just some big
coincidence either. The reality of the matter is that these days the utility
and value of being able to remove and exchange fins depending on the situation
far outweighs whatever slight advantages glass-on fins may still retain over
removable fin systems. In order to make use of this advantage though, it is
first necessary to be able to tell the difference from one fin to the next how
they may ride differently. When it comes to choosing a set of surfboard fins there
are three main elements to consider apart from what sort of board the fins will
go on (i.e. groveler, step-up, standard short board, etc.) or the conditions in
which the fins will be ridden, which are as follows:
1.      The
first and most generally most noticeable feature in a fin is the materials it
is constructed with. Essentially some materials are more flexible than others
and therefore will be more malleable when subjected to the pressures exerted on
it while you are riding a wave. In general, powerful /hollow waves will require
a stiffer fin that will resist energy already generated by the wave to help
control speed and maintain a steady line, while a surfer on a wave which is
more mushy and flat will benefit from a fin that has much greater flex pattern
that will provide a springy and lively feel when pumping to help generate the
speed needed to propel them through weaker sections. Stiffer fins tend to be
ones that are made up of mostly fiberglass materials, while more flexible fins
generally rely on a combination of honeycomb and carbon fiber lay-ups, though
any of these materials can be combined to produce any sort of feel that exists
between these two extremes.
2.     The
second aspect of fin design is the amount of rake in the fin, or how upright or
curved back the fin is. Rake is a fairly simple concept to understand as the
more upright a fin is the more pivot you will get out of your turn in addition
to having a tighter turning radius. Conversely the more raked back a fin is,
the more drive and stability you will achieve from the fin, creating a more
carvey performance.
3.     The
last major feature to consider when selecting fins is the foil of the fin, or
the distribution of the fins mass that is designed to affect the way water flows
through the fin and how it propels the board forward. Fins with a flatter foil
have a more stable and controlled feel to them, while fins with a more concaved
foil will feel more springy and speed generating.
If you’re interested in researching more about
fin design a great place to start is here, where Futures
have broken down all of these aspects in a detailed yet easy to understand
system they have created called Ride Number.
It
should go without saying that just because removable fin systems have their own
unique set of benefits that come with being able to refine your setup with a
few turns of a fin key that glass on fins don’t still retain their own set of
virtues. In fact in an attempt to close the performance gap between removable
and glass-on fins, some companies have began testing fin systems that seek to
emulate the construction and feel of glass-on fins such as with FCS and their Origin series of fins
which blend the base of the fin smoothly into the box and board to create a
smoother transition area from board to fin. As is always the case, there is
never a right or wrong answer when it comes to dialing in your boards and
equipment, all it takes is a little research, experimentation and
open-mindedness to find what works best for you!