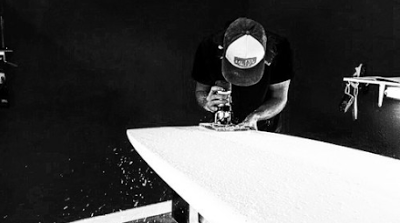 “Become A Surfer, See The World.”

That’s what the slogan would
probably be if the sport of surfing had some sort of regimented organization, akin
to the Navy, trying to recruit people.  People
would join too. That old cliché that surfers are all wanderers at heart
really sells people. In this particular scenario, for every recruit lucky
enough to be stationed in say Indonesia or Fiji, there would be others
inevitably others who (for bureaucracy’s sake) would be stationed somewhere
like England. They would bitch and moan about it initially, no doubt about that.
After all, who’s ever really heard of there being any waves in England?
Occasionally something will pop up in the news about some murky, freezing,
monster of a swell popping up somewhere in Ireland, but England? No chance…
that would be the likely assumption anyways, and in this case, a wrong one.

Though England’s
surfing culture may be smaller and slightly more esoteric than those of other countries,
it is definitely one that is alive and active. As with any surf destination,
when trying to learn the in’s and out’s of a new spot, the most helpful and
knowledgeable people to talk to would be the people who actually surf the area
and the shapers who make their boards. Obviously. In light of an upcoming
surfing tour of England, we’ve decided to do exactly that. We’ve enlisted the
knowledge and insight of Harry Toulson, the shaper behind Whiskey Jack Surfboards who builds his craft on the fascinatingly
scenic Jurrasic Coast in the southwest of England.

Check out the
interview with Harry below to learn a bit about what the surfing world in
England is like and be on the lookout next month for a recap of our experiences
surfing along England’s coast!

1.
First
things first, can you tell us a bit about your background and how you got into
surfing/shaping?

I grew up in
Exmoor, on the Devon/Somerset border, just down the coast from breaks like
Croyde and Saunton. I was in and out of the water growing up and have always
been an enthusiastic surfer, but I didn’t really get into it properly until I
moved back to South West England from Wales, where I was at university, in
my mid-twenties.
I have
always enjoyed making things, and was fascinated by shaping. I got the
opportunity to go and stay in Cornwall, the surf capital of the UK, and learn a
bit about building boards from a local shaper, Jaxon.  Now it dominates pretty much every spare
minute I have, (when I am not working to support the habit)!
2.
Who were
some of the people who influenced you to get into it?

I was
inspired by films like Endless Summer, Thicker than Water, Step into Liquid;
but a real pivotal moment for me was watching Riding Giants in an open air
cinema on Bondi Beach about 2004.  I was
drawn to the lifestyle of those early pioneers, the idea of living a simple
life to pursue something you love is something that still guides me today.
Although the North Shore of O’ahu is about as far as you can get from the
island I live on, the core principals are the same for me.
There’s a
huge list of people that make surfboards that have inspired and continue to
inspire me, too many to list! McTavish, Brewer, the Anderson era has left a
legacy in the world of surfboard shaping, and laid the blueprint really I
think, especially with the rise of shortboards.
With social
media now, it allows you see the work of people building boards from all over
the world, not only that, but you can interact with them and some of them are
kind enough to share the knowledge they have spent years acquiring.
Some of my
favorites at the moment are:
Swop Surfboards, for the pure artistry, some of those boards
are true pieces of art.
Matt Kinoshita is not only an amazing craftsman, he’s a
really nice guy, and always happy to answer questions and share knowledge.
James Otter makes beautiful wooden boards.
I love the stuff that Kirk McGinty is doing with SUP boards,
using cutting edge composites and materials, and really progressive shapes; he
approaches the board building process like an engineer, and it shows.
I love stuff David at Elleciel is doing with paulownia wood, and the stuff DrewBaggett is doing with cork. There are so many that inspire me including all the
amazing glassers and sanders that rarely get a mention!
3.
Let’s
talk materials here for a bit, I would imagine it’s a little difficult to find
some of the tools and supplies around England.
How do you get around that?

I can get
quality blanks, fiberglass, and resin in the UK, but for pretty much everything
else, I have to import from either Australia, France or the USA. I always
prefer France, as it’s close and shipping is fast and cheap, also there are no
import taxes as we are an EU country (for now!). But in reality, most of the
materials they sell come from the States anyway, and that is often reflected in
the price; sometimes you just have to take the hit and pay the import taxes and
order from the USA (Foam E-Z).
4.
What
sort of materials are you working with regularly?

I work
exclusively with RR [ResinResearch] epoxy and EPS foam, aside from the
occasional repair, I won’t touch PU or poly, it’s not my thing. I have been
using a lot of different carbon mixes and reinforcements like vector net, carbon/innegra
mixes, aramid and carbon tapes, but they are expensive, and often have to be
imported.
5.
What are
the waves like around where you live/surf? How do they affect your shapes?

Small,
gutless, often wind swell or swell that has managed to wrap around the south
west peninsular to the Jurassic Coast where I live, so it is often messy.
Boards need to be high volume to make the most of the conditions, and often
they need to be helped along by a paddle, so my main focus is SUP boards. The
north Devon coast is just over an hour away, and there are quality beach breaks
there, Croyde on a good day is world class, but I’m not a fan of crowds, and
it’s just mental at low tide. So I spend a lot of time driving around in my van
looking for spots around here; I love getting those knee high peelers all to
myself!
6.
It seems
you’re a bit of a one-man show, is this by choice or necessity?

It’s a bit
of both really. Making surfboards doesn’t really make me any money, it’s
something I do because I love it. This means I have to spend a lot of my time
doing other jobs to try and support it, so I can’t afford to partner up at the
moment. That said, I would love to work with other board builders and share
knowledge, skills, and a workspace. Perhaps then I could expand. I think that
with the internet changing the way people shop now, you don’t have to be based
with everyone else in the mainstream surf spots, I think it can even be
beneficial to be separate from that, and to try and tap into people just
getting into surfing, or that travel to surf, which is a large portion of UK
surfers.
7.
What is
the surfing/shaping culture like in England, would it be much different than
what you would find somewhere with a bigger surf culture in your opinion?

If you watch
The Endless Winter and Blue Juice you will get a pretty good insight into the
UK surf scene.
8.
Does the
colder climate affect your processes at all, particularly with glassing?

I do my
glassing in a homemade greenhouse, that I can keep at about 17 degrees
centigrade (63 degrees Fahrenheit) which is essential in the winter months.
9.
What
styles of boards do you find to be the most popular amongst surfers in England?

There’s such a range of conditions
around this island, it’s hard to really            have
a one board quiver, but as waves in the south west where I live are often mushy and small, the higher volume
wider boards are popular.
Okay, Rapid Fire
Question Time;
1.
What’s
your go to board (dimension/shape wise)?

One comment on “Interview with Harry Toulson of Whiskey Jack Surfboards”